The Audi brand is the only German luxury car line sold in the United States that is still exclusively made in Germany. All other car makes such as BMW and Mercedes-Benz are manufactured here in the States or assembled from parts made elsewhere. Which gives the Audi line a bit more credibility and class when deciding on a car that will be expected to perform style-wise as well as performance-wise and ultimately, STATUS-WISE.

Audi is the luxury version of the well-built and more affordable Volkswagen brand. As Lexus is to Toyota, Acura is to Honda and Infinity is to Nissan, so is the relationship between Audi and it’s parent company, Volkswagen. Next year, in 2013 the Audi Avant A4 will be phased out in the United States and replaced by the all new 2013 Audi allroad. This “crossover” vehicle is a mighty hybrid between a wagon and an SUV, a luxury version and a damned fine performing one at that.

The philosophy behind this intriguing marketing plan is a basic one geared to and designed specifically for the “Outdoorsy Yuppie”. In looking into this socioeconomic term one finds themselves looking into the more affluent communities along the California coast where thirty-somethings have become late thirty-somethings or early forty-somethings. They have enough money to not only disavow the plebian minivan, but also have enough environmental conscientiousness to spurn the ubiquitous lumbering SUV with all it’s ghastly obviousness. To make short, the 2013 Audi allroad is a car/wagon/SUV for upwardly mobile people with kids who still want gas mileage, fashion and the ability to drop the kids with the nanny for the weekend and drive into the tundra or the desert outback to go “Roughing It” in genuine style. 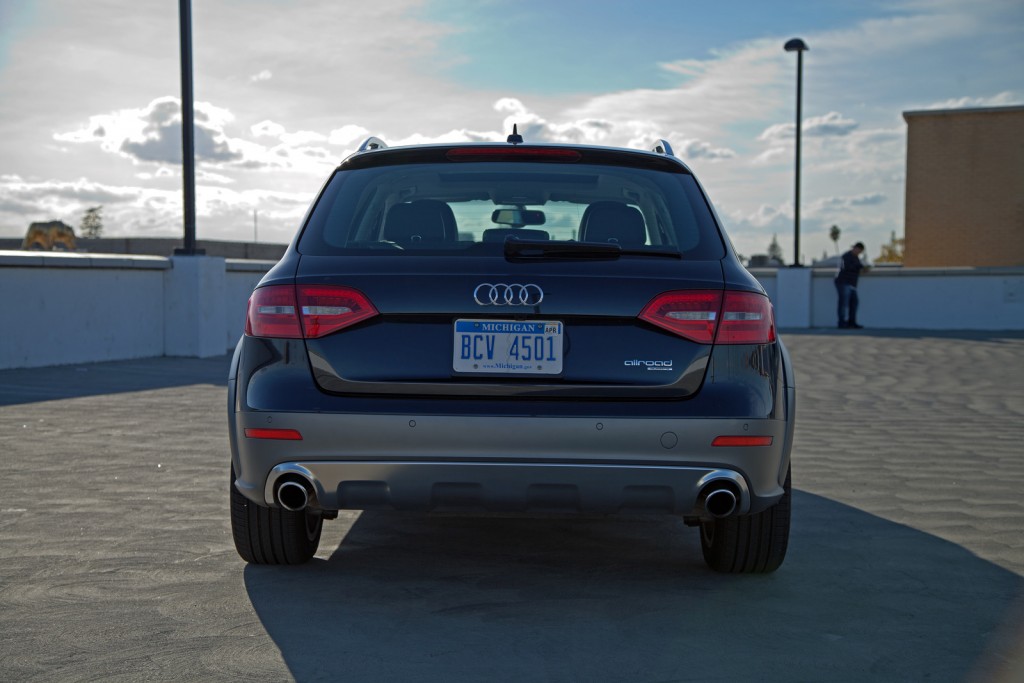 This new design allows for complete luxury and sports capability, a combined quality that can get down and dirty like no other vehicle in its class. It is a hybrid freak of motor vehicle design and it is expected to take over the U.S. market. The Frankenstein engineers at Ingolstadt, Germany, headquarters of Audi AG, have certainly done their jobs creating a monster of a vehicle that will soon define a new identity of driving experience. The creativity and ingenuity to meld different needs and different mindsets in the U.S. markets has produced this new model capable of supplanting not only the domestic American sloth-like SUVs but also other foreign manufacturers such as Honda, Toyota, Subaru and Nissan with their various sporty wagons, trucks, and minivans.

Audi has a slogan: Vorsprung durch Technik, with a rough translated meaning of “Advancement Through Technology”. This has recently been updated in the United States, to express “Truth in Engineering”. Whatever the translation, the business ethic and creative force exemplified by these German car mavens should be expressed in the slogan: “We will find out what you want before you want it and make it so.”

On the outside, the 2013 allroad doesn’t have too much going for it. It comes off kind of bland. The curves are very conservative, the lines and overall shape; from front to back and from side to side say, “Don’t notice me too much. Just a glance and a nod will do. I do not want to stand out. I am all substance and no flash. Credibility. Reliability. My checks will clear the bank and my credit is good.” It seems to fit right in for the target demographic.

The driver of this car has a lot going on and doesn’t care what people think. Except that they are driving a $50,000 luxury car to tote the kids to private schools and then take it into the mud and rocks and snow for the weekend. There are no noticeable gaps in the design or any elements that would make one take a second glance. Elegant and refined, just not too sexy. The premium version has options available such as a rear camera and automatic back hatch. 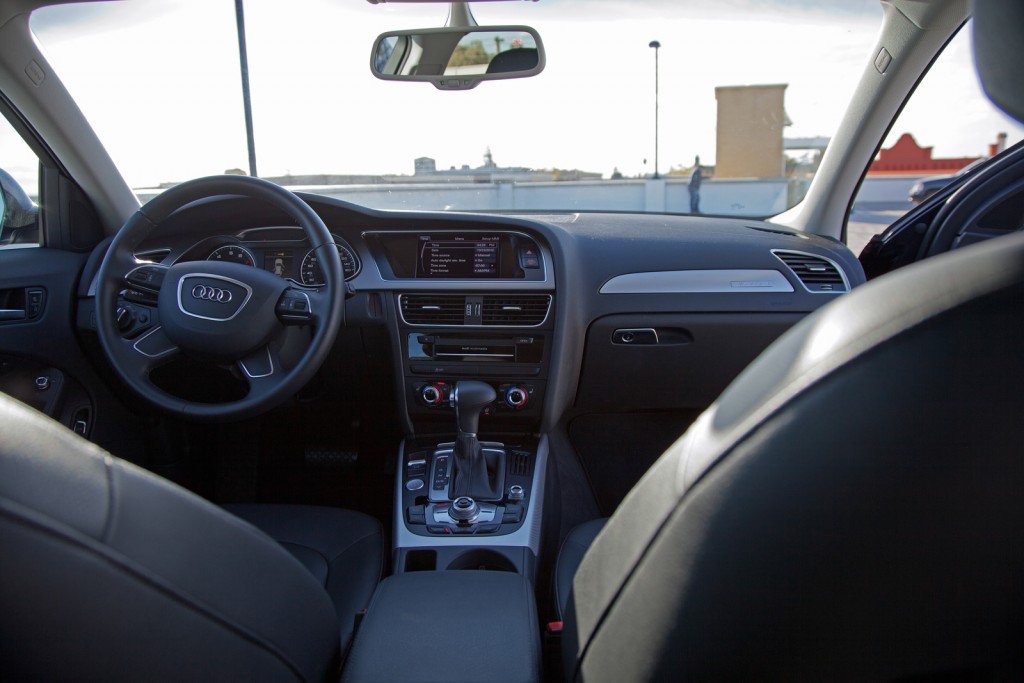 The interior was a completely different experience. All hi-grade leather from dash to rear hatch. The smell is something everyone on their way to better things in life must experience in order to properly motivate them towards that MBA or Phd. The dash and dials are tastefully done along with a competent navigation system (Audi MMI), Bluetooth interface, automatic 8-speed shifter in the center (leather covered grip on the shifter), roomy center console with AC ports for charging smart-phones or other electronic toys, a color multimedia screen, security system read outs and a very competent CD/stereo system.

Sitting in the drivers seat you feel very secure and snug and comfortable and the immediate impression is to stick the key in the ignition and take it out to see what this baby will do. The front seats are eight way power with Driver Seat Memory to make auto-adjusting a push of a button. The cargo area in the back of the allroad could use more room, but it would not ruin any road trips with four adults.

The steering wheel of the allroad is again, leather enhanced with thumb controls addressing the Audi MMI navigation system, Bluetooth, menu button (for the color media screen), a “Car” feature that allows you to customize all the interior controls so you can basically make anything jump inside the car any way you want to. The media screen shows you what you are controlling, in the front left, front, right, rear left, and rear right areas. This includes anything from the windows, speakers (There are fourteen throughout the vehicle) seat warmers, safety belts, rear hatch window defogger, etc.

The steering wheel also has a control button for the Sirius satellite radio as well as a Media button which affects music interface, Secure Digital (SD) card slots, hard disk drive (HDD) audio jukebox or DVD player. The allroad combines Google Earth imagery and Wi-Fi connectivity for up to eight passenger devices, you have multiple ways to stay connected. You can also access information and navigate entirely with your voice in just a few commands. 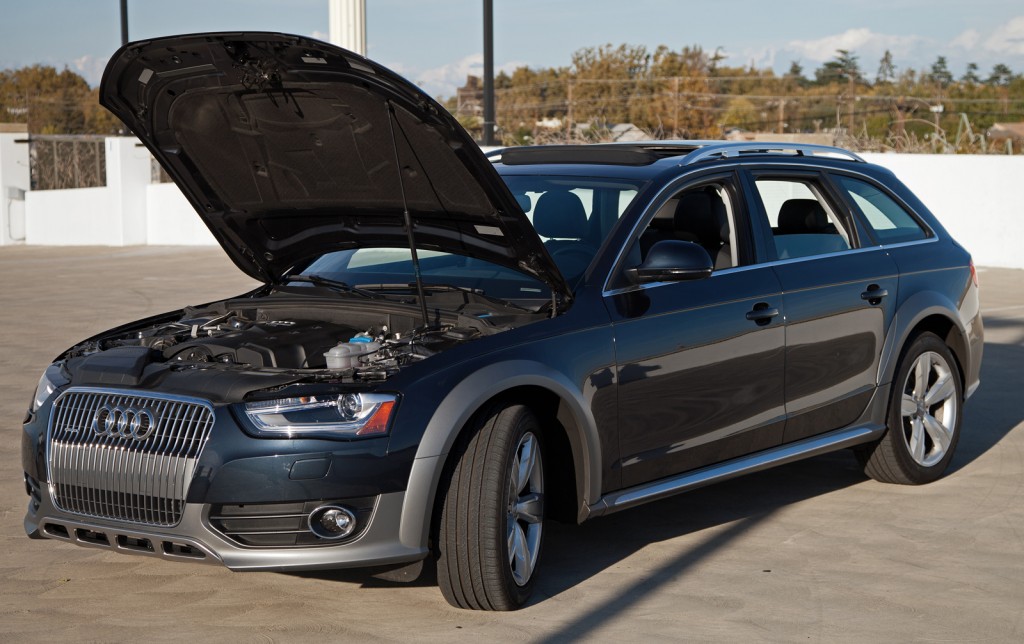 The allroad has a fourteen speaker stereo system (Bang and Olufsen) all of which can be controlled by the driver with either of their two thumbs. The engineers have effectively remapped the listening experience with their new sound system. Very impressive.

The rear seats are just as comfy as the front with room for three adults. There is an electric sunroof with an interior mesh cover that serves as an additional wind and light filter when needed. The gauges in the dash are but two, speed and RPM. Very nicely done to add simplicity, form and function.

Once on the road, this Audi lives up to it’s family name. Zero to sixty in 6.5 seconds. The punch from the accelerator is equal to that of the heavier American, Japanese and fellow European rides. The 2013 allroad sports a four cylinder turbo-charged engine (2.0L Fuel Injection) that tops out at 211 horsepower and provides 258 ft-lbs of torque at 1500 RPM. This vehicle jumps off from the start yet handles like a dream. With tight steering (electro-mechanical Rack and Pinion) the usual tips to and for while taking sharp turns in larger vehicles is not evident. 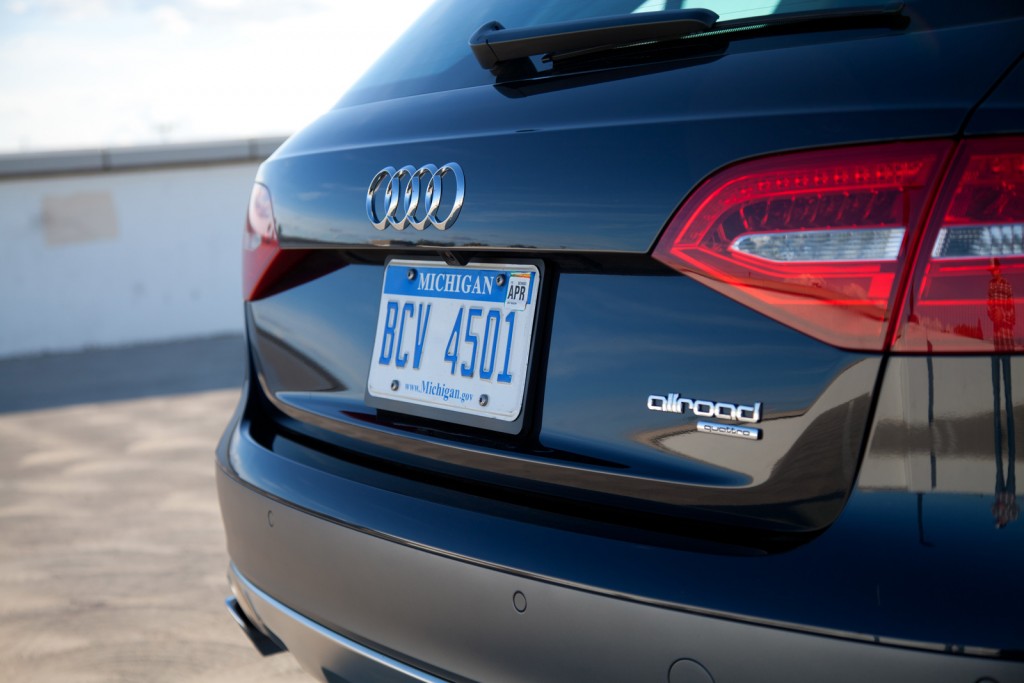 The allroad handles more like a car than an SUV. Quick braking and then turnover to acceleration is optimal—there is no noticeable delay between the two. No turbo jump here either, just smooth power on tap. The chassis is secure and stable and the transmission is the famous Audi Quattro all-wheel drive and seamless. Despite being a large vehicle (3814 lbs) the allroad performs like a much lighter vehicle with a bigger engine. The 18 inch aluminum wheels (19 inch available) hold the road with secure ease and sporty fun. The four-cylinder turbo is quite fuel efficient and with 29 MPG highway and 21 in the city. Emissions are nominal and the whole package delivers.

On whole this vehicle is above par and beyond what one would expect for a first year design. Audi is known for having quality and reliability mixed with performance and a style that speaks to those who consistently demand them. With base models starting at $39,500 and premiums topping out at $51,000 with all options, there is room to move price-wise. I rate this a top buy for 2013 and once again expect it to dominate multiple markets.