America has never fully embraced the idea of the mini car. Historically, entries in this class have been the hair shirts of automobiledom. They were buzzy, shaky, twitchy handling penalty boxes with minimal amenities (“Look, Honey, this one has a mirror on the passenger door, too!”). Comfort was rare and luxury was a myth. That was the price of frugality back then. These days, things are a little bit different. Chevy is aiming the Spark at a group of Americans who were born around the same time as some of the worst of those boxes. Wikipedia’s citations calls them Millennials or Gen Y-er’s.

Whatever you call them, or yourselves if you’re a part of that group, they are savvy to all things digital. For them, connectivity isnt a learned habit, it’s second nature. A cell phone isn’t an accessory, it’s a necessity. To feed that craving for data, Chevrolet offers up the MyLink system as a part of the mid-level 1LT package. Using your own smartphone, either wirelessly via Bluetooth or the plug-in outlet if you own an android, or through use of the USB port for iPhones, MyLink allows you to access much of the media you already carry with you by using the 7″ touchscreen.

While the system doesn’t have stand-alone voice activation, if your smartphone does you can access it with the button on the steering wheel. There are also apps being developed for the system. Pandora and Stitcher are already included while a navigation app is set to come online soon. The system works the same as any touchscreen device once you pair up your phone. If you don’t, there’s a six speaker AM/FM/SiriusXM receiver with three months of trial service, and the usual features of an audio receiver.

Beyond MyLink, the 1LT hauls all the usual suspects along for the ride. Power locks and mirrors, cruise control, theft detterant with content theft alarm, and outside temp display, to name a few. Don’t let the options list trick you into thinking that the entry level LS is a stripped out claptrap at all. The basic baby bowtie sports 10 standard air bags, painted alloy wheels, StabiliTrak ESC with traction control, and four wheel ABS ,though the rears are drums inside those 15-inch alloy wheels. Inside you get power windows, tilt steering, split folding rear seats which allow a swing in cargo capacity from 11.4 cu ft to over 31, A/C, a traditional AM/FM receiver with auxiliary input for your iPod-like device and the obligatory six months of OnStar with new and improved button graphics! 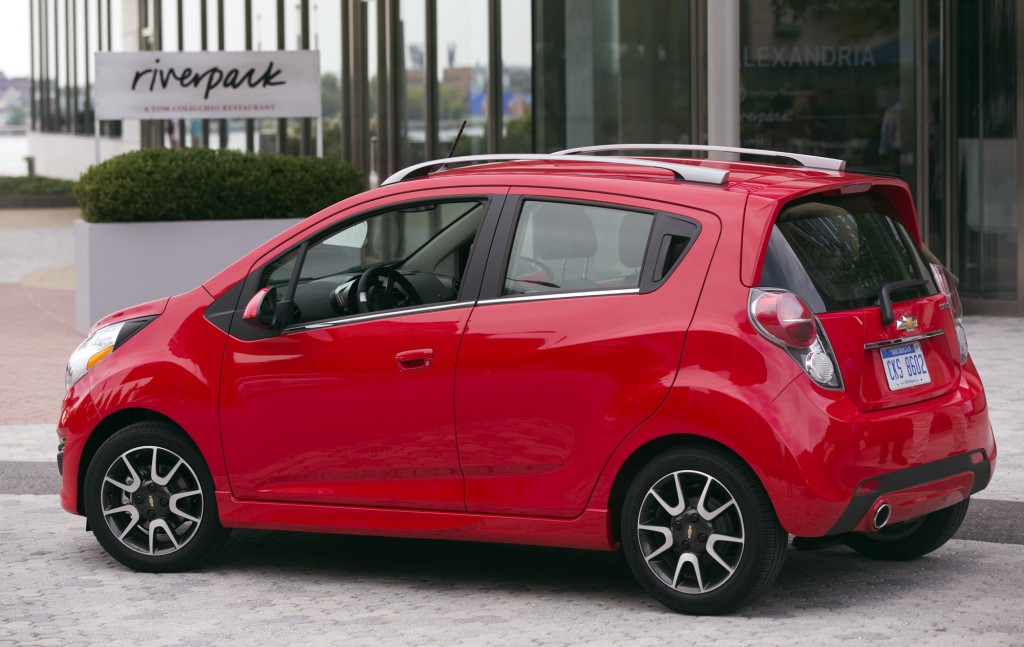 OK, that exclamation point was a little sarcastic. Actually,the better improvement was moving the buttons off the mirror, giving it a sleeker look with its thinner framing. The Onstar mirror in my Impala SS looks like a pair of clunky nerd glasses in comparison. In the Spark they are now on the ceiling in front of the mirror, where the sunroof toggle is in most cars. Spark doesn’t list a sunroof as an option. If you go for the 2LT package ($16,720), you’ll gain leatherette seating and leather wrapped steering wheel, and a host of exterior touches like fog lamps, sport facias with exhaust pass through, the silver painted roof rails and chrome plated bits here and there. It also gets a much more aggressive looking machine faced alloy wheel in the same size as the LS rims.

Despite the small size of the Spark, interior space isn’t a problem. At 5’10” I had no problems fitting comfortably in the front or rear seats without even having to straddle the seatback in the rear when I had the front set for my own height. The seats have a decent bolstering to them, so if you feel the need to explore the limits of the Spark’s “European style” suspension tuning, you wont wear yourself out holding on for dear life. If you do explore it, be prepared for some short wheelbase / tall center of gravity antics. There are only so many laws of physics that stability control can rewrite.

At one point on the drive I had to turn the wheel and stab the brake at the same time on account of an unexpected move by another vehicle and the feeling was… unsettling. That is one of the most unsafe maneuvers in any car, and it was the only moment I felt that way driving the Spark. The route Chevy planned out for the drive took us over a decent spread of the Big Apple’s varying road conditions , and a couple of well timed “wrong” turns gave us a good opportunity to feel some of the worst. Being the small car that it is, the ride didn’t seem innapropriate. With a curb weight under 2300 lbs. and the aforementioned “European” handling, you will feel some jolts but none of the thumps felt like the suspension bottoming out. 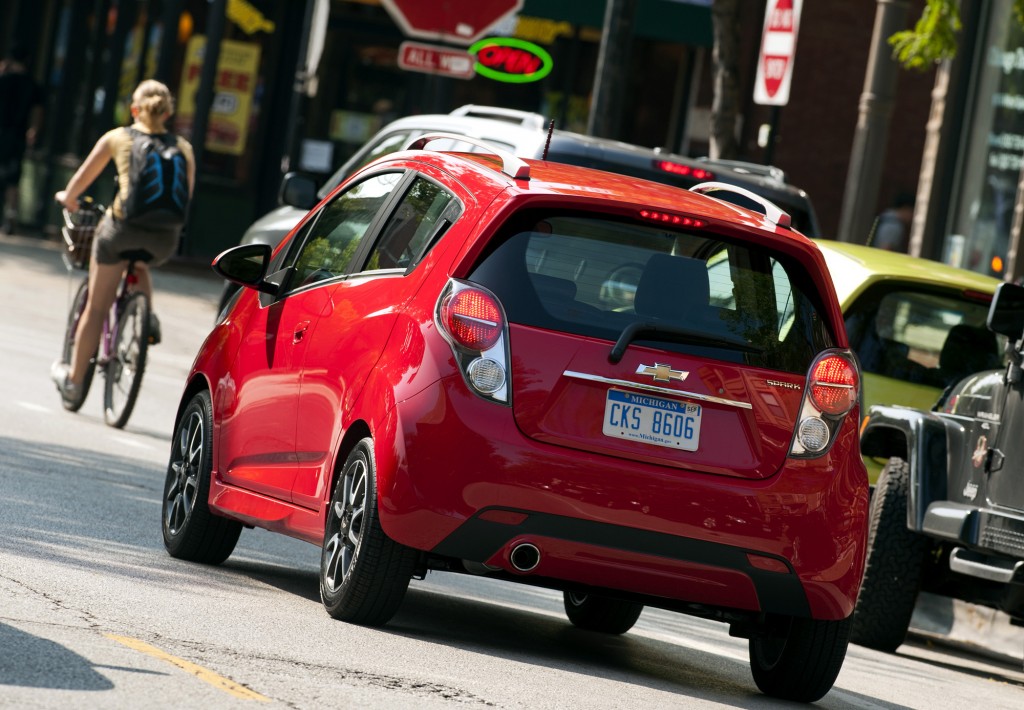 The Spark has been on sale in many international markets since 2009. Chevrolet took note of all they learned and decided that the world Spark needed more refinement. In their efforts to Americanize the car they bumped the displacement from 1.2 to 1.25 liters which added a few digits to the horsepower and torque ratings, now 84 at 6400 rpm and 83 at 4200 rpm, respectively. There’s also added soundproofing presumably offsetting that increase. Acceleration, while not brisk, was acceptable at about 12 seconds to go 0 – 60. When I felt the need to accelerate around a short line of traffic to gain position for the next exit, I didnt have to second guess myself. It wasn’t effortless, though, and as the engine reaches its near 7000 rpm limit there is some feedback that it doesn’t want to be there long, but it pulled it off fine.

I had the chance to drive two of the many Sparks available and both were four-speed autos. Though both my driving partner Scotty Reiss of SheBuysCars.com and I expressed an interest in a manual drive, there were few cars with manuals to choose from and we missed out on the five-speed. Shifts in the automatic were noticeable, as opposed to CVT-like. At full throttle the 1-2 shift was reasonably firm, while at part throttle the shifts flowed into the next gear without being real mushy. I did notice a seeming disconnect between planking the pedal and acceleration actually starting, almost as if it was asking “Are you sure? Is that your final answer?” Downshifts at speed didn’t suffer from that effect, nor was it evident under part throttle run ups. Fuel economy is pegged at 32 miles per gallon city, 38 highway, or 34 combined in the 5-speed, with the slushbox dropping it to 28/37/32. An extra gear or two would help that, but the price would probably push right up against the Sonic.

The electric power steering worked seemingly fine. It felt remarkably similar at higher speeds as it did at lower with no evident dead spots on center. On the highway surrounded comepletely by trucks, the Spark reacted fairly neutral to buffetting despite the relatively tall body. Sightlines from the drivers seat are good with the only downside being the invisible front end. If you have a poor sense of spatial acuity you might want to invest in some of those black rubber strips that taxis use on the corners of their bumper. Concern of damaging it in close quarters kept my attention for a little while, but I got used to it.

One thing that some people can’t get used to is the looks. On screen, the images we’ve seen make the headlights look huge. In person you lose some of that appearance. Only some of it. While the Corvette has no need to worry about being overshadowed by the Spark’s sex appeal, there is a subtle sportiness to the design that seems almost CUV’ish, like someone cut the cargo area off an Equinox and ran what was left through a taffy puller. I saw lots of heads turning to look at the line of mostly brightly colored speed bumps driving through the city, and, in the mirrors, I caught sight of one guy weaving his Aveo through traffic to get alongside us where he gave it the thumbs up and asked how I liked it. On the other hand, I overheard one passerby comment while we were stopped taking some pictures that he “wouldnt buy no shit like that”. So, polarizing wouldn’t be an inaccurate adjective in a sentence describing the appearance.

On the interior the basic shapes are familial without being direct copies such as the door panels that echo the shape of those in the previous, much maligned generation Aveo. The surface details of the dash echo the outboard to inboard downward sweep of the Cruze. The instrument cluster may actually look and feel more upscale than the panel from the Sonic which it was inspired by. Apparently, Millennials like motorcycle gauges. Another aspect of the interior is what Chevy is calling “truth in materials”. As you could imagine, there wont be a faux woodgrain plastic in this car, nor are the synthetic seating surfaces designed to look like suede or leather, although I suppose the leatherette ones are.  The dash covering is a hard plastic that actually has a rubber-like feel to it, and the textured design is pleasing to the eye and looks to be easy to clean.

As a Car Fanatic, I can and will always cry out for more horsepower. As a pragmatist, I will always understand that the tool has to fit the job. That’s what the Spark does. It gets the job done. In an era when style trumps substance, the surprise here is that under all the fashion colors, connectivity and giant headlights, there’s actually a decent little car.

But I still want more horsepower.

Written By
John Ringwald
More from John Ringwald
With a new nomenclature, Infiniti launches the all new Q50, replacing what...
Read More