We’re all familiar with the Focus by this point. Its a quality, competetive entry in the compact car segment with a variation that fits nearly every lifestyle or pocketbook. By adding the electric powertrain, Ford hopes to bring the ecologically minded car buyer into the Blue Oval corral.

We recieved the car on the seventh floor of the Manhattan Motor Company facility on 11th Avenue. After a quick introduction to the Focus and MyFord Touch, one of the company techs drove us down seven stories of circular ramps to the service exit. When I buckled up and checked the gauges, I was glad to see that riding the brakes down the fairly steep ramps had added two miles to the expected range. Regenerative braking is an important part of the Focus’ (and all electric vehicles’) efficiency and one of the major differences you will discover about electric cars vs internal combustion variants, but not the first difference.

First you’ll notice the silence of the drivetrain. This was my first experience with an electric vehicle that didnt move pallets or buff floors, and the dynamic difference between an operating gas engine and an electric motor on stand-by are dramatic. That silence makes itself known in the driving experience, as well, with the intrusion of other vehicle’s sounds and some tire noise (but no other untoward suspension sounds from the Focus itself) into the passenger compartment. 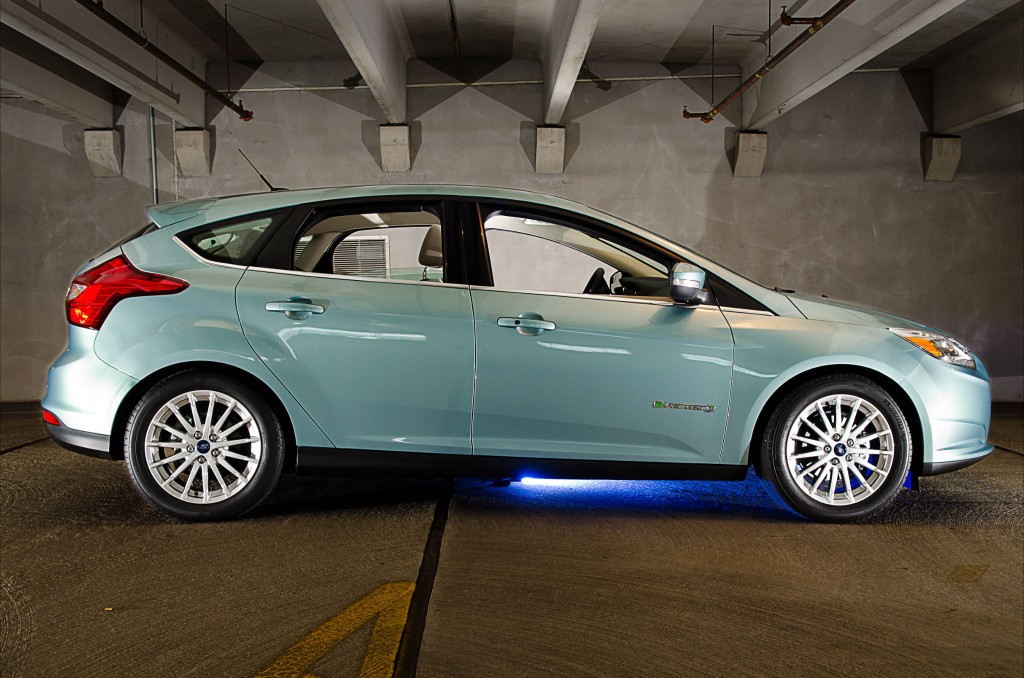 Its not that any of those noises were particularly louder than in an equivalent IC car nor did we have to speak louder than expected to be heard over it. Simply put, the sheer lack of driveline noise worked to amplify what would normally be secondary sounds, attracting your attention by default.  That lack of drivetrain noise doesn’t equate to a lack of power, though.  The drive motor is rated at 107kw (or 92kw dependant upon where you look on Ford’s website which converts to about 123 hp and 181 lb ft of torque. While the numbers dont look impressive on paper they feel much different on the road.

This is the second difference. Without any accessories to drive, almost all of that power can be used to motivate the Focus via its one speed transmission. Though I didn’t take any measured time runs, I can say that accelleration is smooth, from tip in until about twenty mph where it seems to gain speed with a little more enthusiasm, similar to how an older turbo motor would. Merging with traffic was effortless, but costly to the range. That same 68 miles of indicated range suddenly became 49 after just a few minutes of enthusiastic driving up and down 12th Ave that encompassed only about five miles but did include a couple 5-70 mph runs.

Thankfully, difference number three can recover some of that spent enthusiasm. The regenerative brakes can recover up to 90% of the energy normally lost as excess heat through friction. Once we started off on the drive through NYC under less enthusiastic conditions, the system did a good job of recharging the 23kWh Lithium-ion battery. It’s very easy to stop without engaging the brake pads if you try. 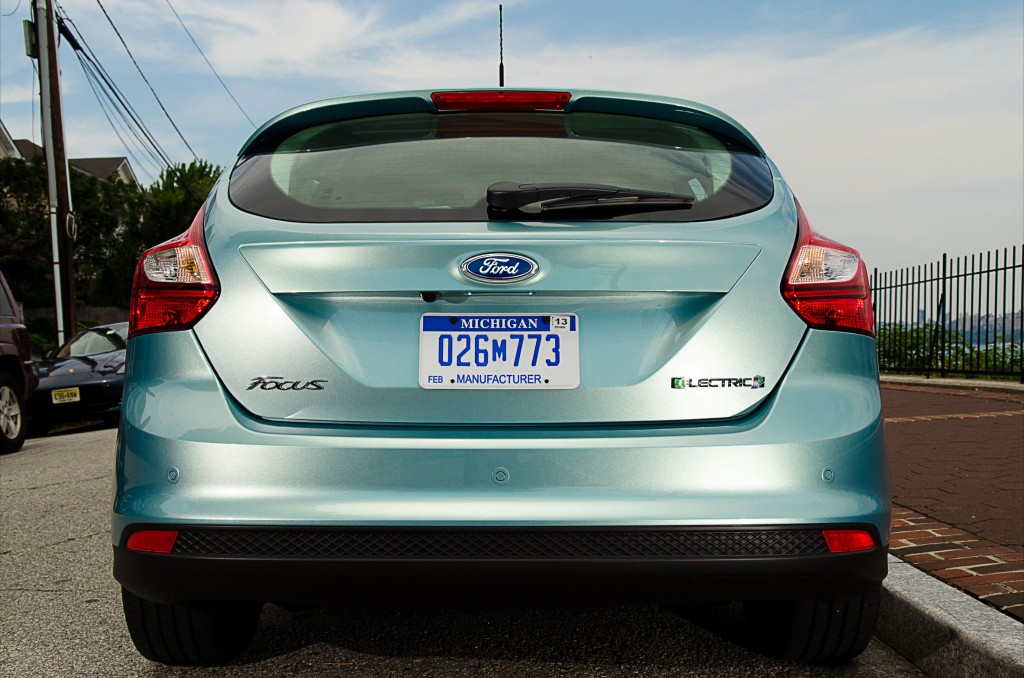 There is a bit of a learning curve, though. The first few times I touched the brakes, they grabbed like I was panic stopping. In fact, one time I nearly sent Cesar and his camera right through the MFT display. I hope he got that closeup shot of the nav screen he wanted. After a while I became more accustomed to it, but occasionally it would strike again. On the left side of the dash is a Brake Coach gauge that will help you learn how to use proper modulation of the pedal, I even got a few 100% regen displays. That was cool. It’s no help with that initial grab, though.

The Focus’ handling is pretty well balanced. I wasn’t exactly clipping apexes, but on a mad dash through the back streets of Weehawkin following a local with a Focus Titanium, there was no excessive tire squeal or any body motions that caused concern and with the taller profile tires the ride was comfortable.

The Focus Electric’s interior is essentially the same as the IC Focus, meaning that the seats are firm and well bolstered and still comfortable while the cabin is well laid out with all controls within easy reach.The only disappointment is in cargo space. The battery and charger are stacked behind the folding rear seat with about five inches of space above it. If you were heading to IKEA for a bookcase you might want to see if you can use your buddy’s Explorer instead. The MyFord Touch screen sits up high on the center stack, easily visible and usable by both driver and passenger. 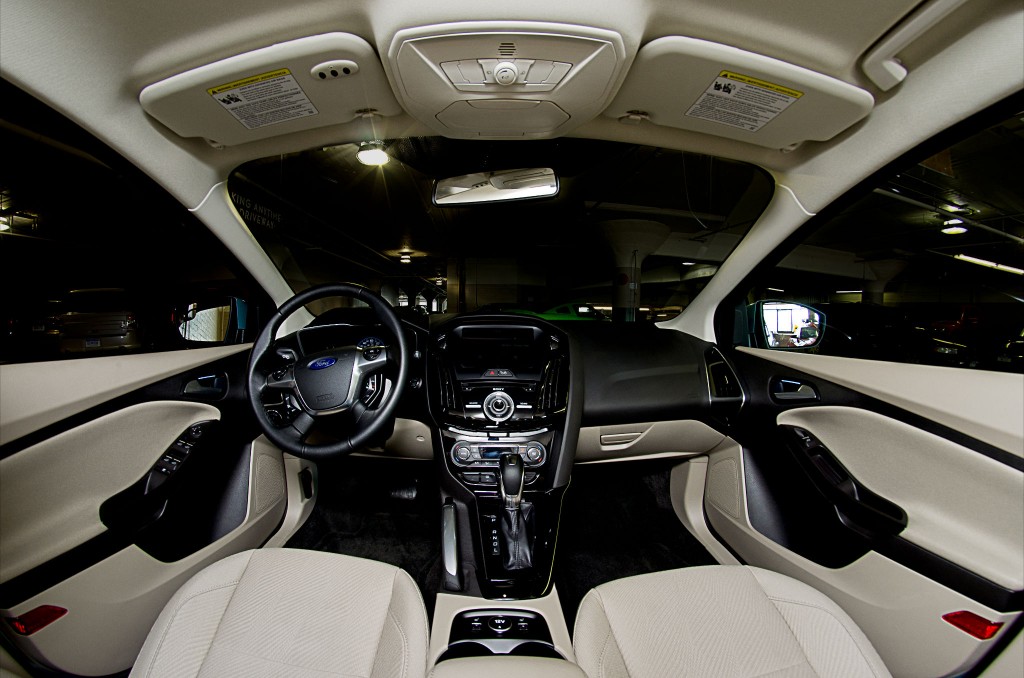 This was my first experience with MFT and honestly, I dont get the angst. I didn’t spend a lot of time exploring the workings of the system, but the things I wanted to use were pretty straightforward. The voice activation worked fine as long as there wasn’t any loud ambient noise and you tried to speak slower than a 14 year old girl with two cell phones. The navigation system is GPS based and got lost when I went through the Lincoln Tunnel, but was fine for the rest of the time.

All in all, the Focus Electric is a fine car. I’d like to drive a second one to see if the brake sensitivity is me or a fine tuning issue. I’d also like an opportunity to drive one for a longer time period so I can live the recharge experience and get a sense of its efficiency. In our hands, the Focus drained 39 miles of range while being driven only about 30.

That was without any attempt at efficiency other than braking. Yes, another, longer opportunity would be more informative. The compromises required by the electric powertrain, with the exception of the battery location, are acceptable if your use of the car fits its strengths. If you have a sixty mile commute, take the bus. It’s cheaper and you’ll get more sleep. If you have a medium length commute or do more stop and go driving than at highway speed, this is your car.

Written By
John Ringwald
More from John Ringwald
If sharing is caring, the folks at Ford care about the Fusion...
Read More
0 replies on “2012 Ford Focus Electric: Quick drive”