When you think Buick, thoughts of retirement and old age seem to filter into many people’s minds. With the exception of the GNX, most cars that carried the Buick tri-shield were floaty, large and yawn inducing and.  Never were they stylish compacts. With GM’s restructuring, many wondered whether or not Buick would live much longer. Thanks to GM and their new marketing and product strategy, Buick now has new life and is undergoing a renaissance of their own with their all new compact, the Verano.

The Black Onyx Verano looks elegant with its simply styled 18” aluminum alloys. Chrome can be found at just about every angle when viewing the car from the redundant and fake hood vents, the fog lights, the strips on the door handles and even on the thick eyebrows found accenting the tail lights. I am no fan of chrome, but the nice touches on this car do work in its favor. The headlights are big and Buick decided to forgo the HIDs in place of a cool blue ring that encircles the halogen housing instead. For a premium car, it doesn’t seem to make much sense to not have HID head lights. The mirrors are body colored and heated, and the greenhouse glass is solar tinted to reduce the harmful effects of the sun’s UV rays. 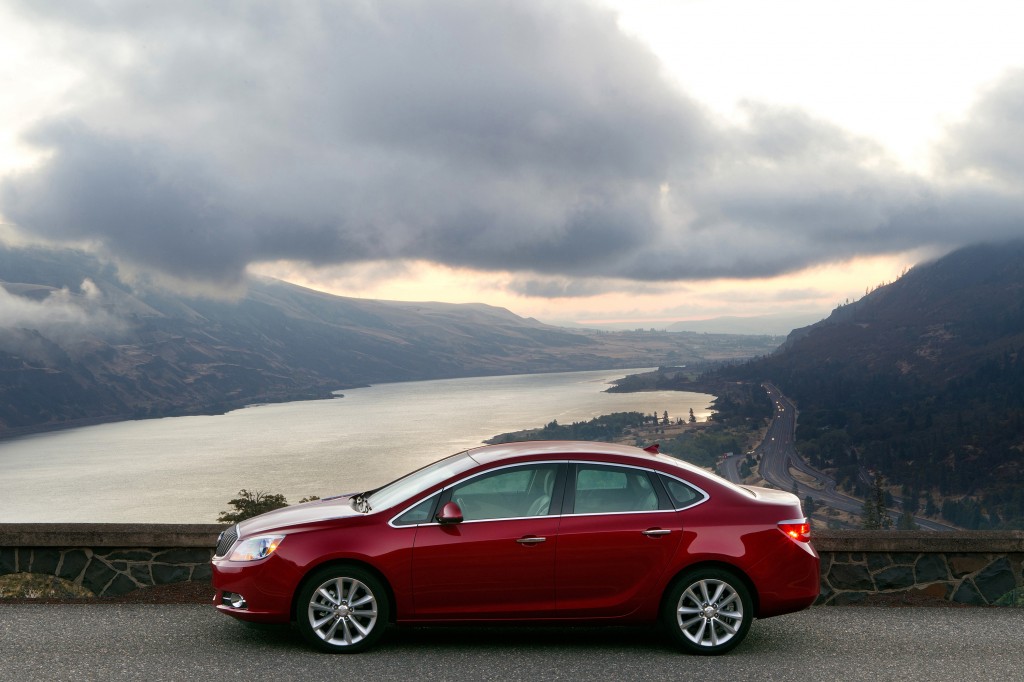 Our tester came equipped with the Choccachino leather interior that is so incredibly soft that would make a S-Class jealous. The brown leather is also draped across the dash board and the entire car smells of a coffee house every time you step inside. The front door sills are padded leather while the rears are of a nicely finished but hard plastic. The tall greenhouse and large side view mirrors do a great job of cutting down blind spots, and the ice blue illumination is incredibly easy on the eyes when driving at night. The instrument panel houses the tachometer on the left and speedometer on the right while an information screen separates both of them. Buick seems to have gone overboard with the gauges and placed numbers denoting 30mph, 50mph, 70mph and so on on the chrome trim surrounding the analog gauges and it is virtually impossible to see during the day or night. Why Buick?

As comfortable as the seats were, the tester did not have any lumbar support which were their only drawback. The front seats are heated as well as the incredibly thick steering wheel which will tilt and telescope to give you that perfect fit. It was very hot and humid out when I had the car but I hit the button for the heated steering wheel a few times just to see how it worked for the sheer thought at not having to worry about gripping cold leather during the winter months. Combine the heated elements in the interior with the remote start and winter won’t look so bleak.

The dual zone climate control is easily accessible via either the buttons on the center console or the 7” touch screen that is mounted high on the dash. It is a little hard to get to depending on your seating position which can be a hassle to many. The buttons on the steering wheel and on the center console are high grade plastics and are easy to read and use. The rear seats are just as comfortable as the fronts and given my driving position, it was adequate for my 5′ 10.5” frame and headroom was excellent. It may be tight for three full adults in the back but children won’t complain. The trunk is rather large for this size car and was able to fit two suitcases and a few comforters in the back while helping my friend move into his new apartment. Should you need more room, you can fold down the rear seats, however, the opening isn’t as big as it seems to have suspension and chassis supports competing for real estate. 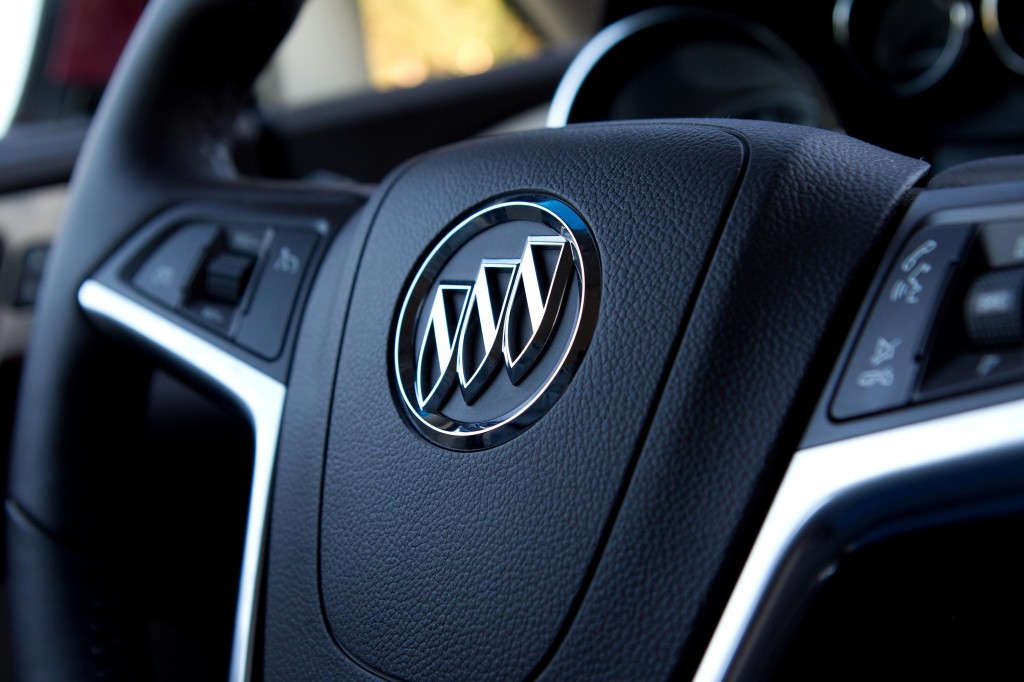 I have never associated a Buick with having any sort of spirited driving dynamics, until I drove the Verano. The chassis is great but is held back by its numb steering, hefty feel and a power plant that could use a bit more oomph. The car defaults to understeer but it has some serious front end bite which seems to indicate that you can toss it into a turn harder but the lack of response and feedback through the helm makes you think twice about doing so. The brakes didn’t show much fade, but then again, you won’t notice any of it if you drive normally.

The car is exceptionally quiet and makes highway trips a breeze. I did not feel tired on my highway commutes and even around town. The seats don’t have much lateral support but Buick doesn’t expect its customers to autocross this car on the weekends. The direct injected 2.4L Ecotec churns out 180hp and 171 ft-lbs of twist and requires only regular gas or E85 to do its work. Its acceleration is adequate and keeping up with traffic and merging into highway speeds isn’t a strenuous task for the engine. Its is quiet under low load but can sound a little coarse when demand gets higher. The four cylinder combined with the 6-speed automatic eeks out a respectable EPA estimated 21mpg city/32mpg highway. Without much difficulty, I was able to achieve 27.1mpg on my highway trips using A/C and with luggage while attaining speeds of 75mph or greater. This car with a lighter platform would easily attain much better fuel economy and would be a bit more lively to drive hard. 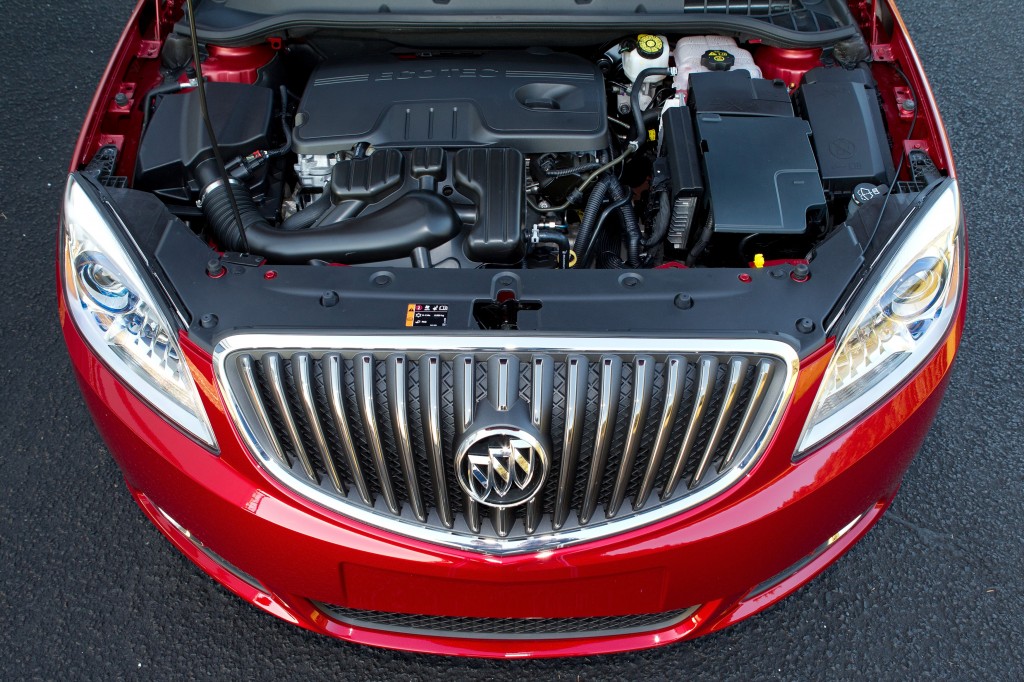 Parking the Verano can be somewhat difficult because you have no idea where the front of the car ends. The long dash and sudden drop off of the hood makes it difficult to tell how far you are into a parking space or how much further you can turn into a space before you hit your soon to be neighbor. The car comes standard with StabiliTrack and in my escapades, it never interfered. Inducing wheel spin with the system turned off is almost impossible. Then again, this is not the type of car to do childish antics in.

Overall, this car is a comfortable and tech filled cruiser with excellent fit and finish all for an as tested price of $27,645 including destination. It makes for a compelling argument against the competition with similar equipment while costing a couple thousand dollars less and doing it all on regular gasoline. That should sound good to both you and your bank account.